FIRE BRIGADE HAMPERED BY LACK OF WATER ON SITE 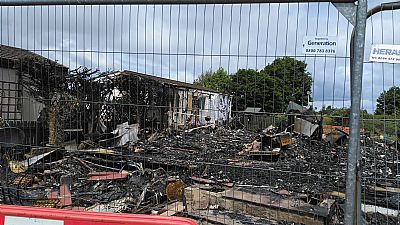 We understand that about 13.30 on Tuesday 2 June 2020, a fire broke out in a garden shed adjacent to a home on the park and quickly spread to the home and a neighbouring home, destroying both.  Two other nearby homes were badly damaged.

A Scottish Fire and Rescue Service (SFRS) spokesperson confirmed the fire started in a shed before spreading to nearby “static homes” and that there were eleven response units and fire engines, including specialist command, at the scene,

SCOPHRA understands from residents on the park that the fire brigade was hampered in their efforts to control the fire and its spread, through lack of water on the site.

One lady resident told us " it is such a heart-breaking tragedy; I am feeling very low.  we have campaigned for proper facilities on this park for years, but the owners just ignore us.  We have had loss of electricity, potholes everywhere, a derelict home attracting vermin, flooding, dumping authorised by he site owner and Midlothian council does nothing. We believe that the fire hydrants were connected to the domestic supply with that limited pressure"

Straiton Park Residents Association is a member of SCOPHRA, so we contacted the Association for further detail.  Their spokesman told us that the site owners had tried to close the park last year to turn it into a development site and had tried to remove the residents.  Since park home residents cannot be removed from their site a strong campaign involving Midlothian Council, the licensing authority, insisted that a new licence be sought.  This was granted, under great protest from the residents, on the grounds that the Council could more easily control the site if it were licensed.  The new licence came with many conditions including adherence to fire regulations and this incidents proves how little action the Council has taken.  This incident could have resulted in fatalities which would have had serious consequences for the park owner.  They Association are now pressing for a full enquiry into this incident with sanctions from the Council and enforcement action.

SCOPHRA urges all site residents and owners to ensure that proper safety and fire precautions are in place . 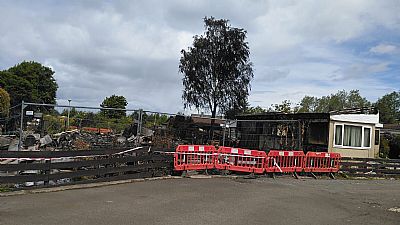